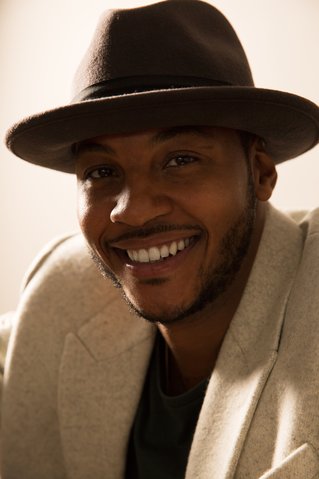 Since arriving in the NBA, Melo has not only been one of the top scorers in the league, he has also diversified himself as a player, a family man, a businessman and a philanthropist. He is a member of the exclusive and coveted Team Jordan Brand, annually releasing a top-selling signature sneaker.

Melo has also cultivated brand partnerships with Finishline, Topps and EA Sports. Most importantly, Melo has excelled off the court through his philanthropic and entrepreneurial efforts. He established The Carmelo Anthony Foundation (CAF) in 2005 as the vehicle for which he and his family would give back to the community through a variety of outreach programs and donations. In 2006, The Giving Back Fund, the premier philanthropic resource for the sports and entertainment communities, ranked Carmelo in their top ten of the “Giving Back 30” report surrounding celebrity philanthropists in America. He was the only basketball player on this list, and was joined in the top tier by celebrities such as Oprah Winfrey and Tiger Woods. His heart for the community leads him to look for creative ways to give back. He has partnered with his college coach, Jim Boeheim, to start the Courts 4 Kids program. Together they look for courts in underserved areas and refurbish them. The first court was completed in the summer of 2009 in Syracuse, and since then several more have been refurbished in New York City and Puerto Rico. He has now refurbished 21 courts since Courts 4 Kids was established.

Drafted 3rd overall in the 2003 NBA Draft by the Denver Nuggets, Carmelo Anthony has surely made a name for himself in the league. As he showed the world during his championship season at Syracuse University, Carmelo continues to prove to his fans, teammates and coaches that he is a hard worker, a leader and a competitor. The Olympics proved to be the perfect display of his passion, maturity and excellence for the sport – and winning the Gold Medal in both the 2008 and 2012 games has been the ultimate token of redemption, success and global recognition for the NBA All-Star and three-time Olympian.

In July 2008, Anthony was honored as Basketball Player of the Year at the 1st Annual Univision Premios Deportes, an awards show celebrating the best of Hispanic athletes. Carmelo proudly accepted the award in appreciation of his Puerto Rican father, Carmelo Sr., who passed away when he was just two years old. To further honor his Puerto Rican heritage; in the summer of 2015 Mr. Anthony became the sole owner of an NASL soccer team – the Puerto Rico FC.

He is excited to impart the knowledge he has acquired as a current professional athlete into his ownership role and partner it with his business acumen to develop PRFC into the premier soccer team for the Caribbean Carmelo also started Melo 7 Tech in 2014, as an avenue to invest in companies he believes will become a force in all areas of the world from health care to apparel. His deep interest in the latest technology often leads to times where Melo has to carry a separate bag just for his gadgets! He considers it research development, and takes great pride in managing these businesses and establishing his footprint in the technology space.