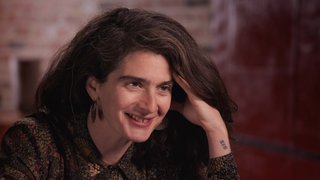 Relatives We Never Knew We Had

Gaby Hoffmann is featured in Season 4, Episode 8: Relatives We Never Knew We Had (check local listings).

Gaby Hoffmann currently stars on the critically acclaimed Amazon show "Transparent" for which she received an Emmy nomination in 2015 for Outstanding Supporting Actress in a Comedy. Gaby has acted in dozens of films, on stage, and guest starred on "Louie" (FX), and "Girls" (HBO) for which Gaby received an Emmy nomination in 2015 for Outstanding Guest Actress in a Comedy Series (Girls). Gaby lives in NY with her boyfriend and daughter.