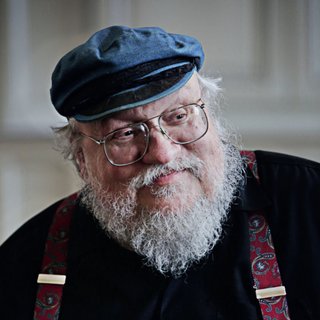 Grandparents and Other Strangers

George R.R. Martin was born September 20, 1948 in Bayonne, New Jersey. His father was Raymond Collins Martin, a longshoreman, and his mother was Margaret Brady Martin. He has two sisters, Darleen Martin Lapinski and Janet Martin Patten.

As a conscientious objector, Martin did alternative service 1972-1974 with VISTA, attached to Cook County Legal Assistance Foundation. He also directed chess tournaments for the Continental Chess Association from 1973-1976, and was a Journalism instructor at Clarke College, Dubuque, Iowa, from 1976-1978. He wrote part-time throughout the 1970s while working as a VISTA Volunteer, chess director, and teacher.

Martin became a full-time writer in 1979. He was writer-in-residence at Clarke College from 1978-79.

Moving on to Hollywood, Martin signed on as a story editor for Twilight Zone at CBS Television in 1986. In 1987 Martin became an Executive Story Consultant for Beauty and the Beast at CBS. In 1988 he became a Producer for Beauty and the Beast, then in 1989 moved up to Co-Supervising Producer. He was Executive Producer for Doorways, a pilot which he wrote for Columbia Pictures Television, which was filmed during 1992-93.

Martin’s present home is Santa Fe, New Mexico. He is a member of Science Fiction & Fantasy Writers of America (he was South-Central Regional Director 1977-1979, and Vice President 1996-1998), and of Writers’ Guild of America, West.