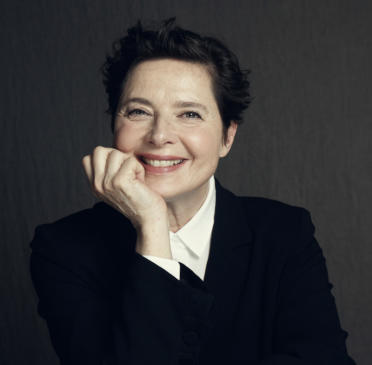 Isabella Rossellini grew up in Paris and Rome. When she was 19, she moved to New York City, working as a translator and journalist for RAI-Italian Television. She began a modeling career at the relatively advanced age of 28, appearing on numerous covers of magazines such as Vogue, Elle, Harper’s Bazaar and Vanity Fair.

An enduring style icon, Ms. Rossellini began a 14-year run in 1982 as the exclusive spokesperson for Lancome. When she turned 40 years old, an age considered too advanced to represent beauty industry, her contract was not renewed. Isabella launched her own cosmetics brand Manifesto but in 2016 Lancome hired her again as a spokesperson with the specific intent to promote inclusiveness and fight against "ageism".

Ms. Rossellini made her cinematic debut as an actress in 1979 in the Taviani brothers’ film Il Prato (The Meadow) and has appeared in numerous other films, including the American features Blue Velvet, White Nights, Rodger Dodger, Cousins, Death Becomes Her, Fearless, Big Night and more recently in Joy. She worked with directors from many different directors like Robert Zemeckis, David O. Russell, David Lynch, Robert Wilson Taylor Hackford, Marjane Satrapi and Guy Maddin.

Isabella is completing her master degree in Animal behavior and Conservation at Hunter College in NY and obtain a PhD honors causa from the Science faculty at UQAM (University of Quebec at Montreal).

Isabella also runs an organic farm in Brookhaven is association with the Peconic Land Trust. Her book about raising heritage chickens entitled My Chickens and I is published in the USA by ABRAMS BOOK

Ms. Rossellini’s philanthropic interests embrace preservation of her family’s extraordinary cinematic heritage, including the films directed by her father, Roberto Rossellini, about whom she has written, and those featuring her mother, Ingrid Bergman. She also runs an organic farm in Brookhaven is association with the Peconic Land Trust.

Ms. Rossellini is a mother of two and resides in Bellport, Long Island.