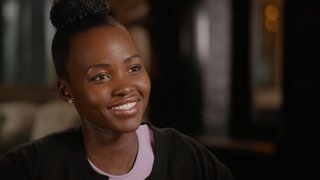 Children of the Revolution

Lupita Nyong’o made her feature debut in Steve McQueen's Academy Award® winning film 12 Years a Slave alongside Chiwetel Ejiofor, Michael Fassbender and Brad Pitt. For her portrayal as “Patsey,” Nyong'o received the Academy Award® in the category of “Best Supporting Actress” as well as multiple accolades including the Screen Actors Guild® Award, the Critics' Choice Award, the Independent Spirit Award, NAACP Award, and the 2013 Hollywood Film Awards "New Hollywood Award."

In 2016 Nyong’o starred in Mira Nair’s The Queen of Katwe, opposite David Oyelowo and Madina Nalwanga. Based on the bestselling book of the same name, the Disney film is an inspirational true story about Phiona Mutesi who overcomes abject poverty to become an international chess master. Nyong’o portrayal of Phiona’s fierce yet tender mother, “Harriet,” earned her a nomination for an NAACP award for Outstanding Supporting Actress in a Motion Picture.

Also in 2016, Nyong’o lent her voice to Jon Favreau’s The Jungle Book as “Raksha.” In the same year, Nyong’o earned a Tony nomination for her Broadway debut in Danai Gurira's play Eclipsed, which tells the story of five extraordinary women together by the upheaval of war in their homeland Liberia.

Nyong’o will reprise the role of “Maz”  in Star Wars: Episode VIII, directed by Rian Johnson, which Disney will release on December 15, 2017. Following that she will star alongside Chadwick Boseman, Angela Bassett and Michael B. Jordan in Marvel’s The Black Panther, directed by Ryan Coogler. The film is set to release in theaters on February 16, 2018.

Nyong’o is set to produce and star in the film adaptation of Chimamanda Ngozi Adichie’s bestselling novel “Americanah," alongside David Oyelowo. "Americanah" is the sweeping love-story that spans three continents of Ifemelu and Obinze, two Nigerians who face the complexities of race and identity away from home and each other.