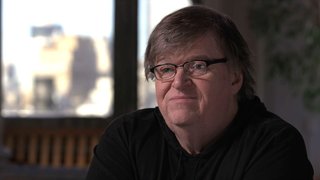 Michael Moore was born in Flint, Michigan. He became an Eagle Scout, attended the seminary for the Catholic priesthood, and at age 18 became the youngest elected official in the country. At 22, he founded the Flint Voice, a nationally-recognized alternative newspaper. In 1989, Michael made his first film, the ground-breaking "Roger & Me," which gave birth to the modern-day documentary movement. Moore went on to break the documentary box office record two more times with his 2002 Oscar-winning film, "Bowling for Columbine" and the Palme d'Or-winning "Fahrenheit 9/11." Other notable films include the Oscar-nominated "Sicko," “Capitalism: A Love Story,” and “Where To Invade Next”. Michael won the Emmy Award for his prime-time NBC series "TV Nation" and is one of America's top-selling nonfiction authors, with such books as "Stupid White Men" and "Dude, Where's My Country?" and “Here Comes Trouble”. Michael lives in Traverse City, Michigan, where he founded the Traverse City Film Festival and two art house movie palaces, the State Theatre and the Bijou by the Bay. He has been named one of Time Magazine’s 100 most influential people.