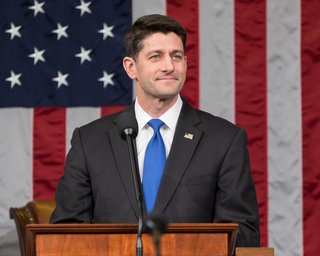 Paul Ryan is the 54th Speaker of the U.S. House of Representatives. Now serving his tenth term in the House, he represents Wisconsin’s First Congressional District. Paul, his wife, Janna, and their three children, Liza, Charlie, and Sam, live in Janesville, Wisconsin.

A fifth-generation Wisconsinite, Paul is the youngest of four children born to Paul Sr. and Betty Ryan. When he wasn’t in school, he helped make ends meet by doing all sorts of odd jobs: painting houses, landscaping, mowing lawns. He graduated from Joseph A. Craig High School and later earned a degree in economics and political science at Miami University in Ohio.

In 1992, Paul moved to Washington, D.C., where he learned from a number of conservative mentors. His first job was working as an aide to Senator Bob Kasten (R-WI) on the Senate Small Business Committee. After a disappointing election for Republicans, he left the Hill to do policy analysis at the think tank Empower America for former Congressman Jack Kemp (R-NY). (He met Kemp while waiting tables at the Capitol Hill restaurant Tortilla Coast.) In November 1994, Republicans won a majority in the House for the first time in 40 years. The next year, Paul returned to the Hill as legislative director to then-Congressman Sam Brownback (R-KS).

In 1998, after moving back to Janesville, Paul won his first election to the House at the age of 28. He was the youngest member of his freshman class. While serving in Congress, he met his wife, Janna. In April 2000, he proposed at a favorite fishing spot, Big St. Germain Lake in Wisconsin. They were married in Oklahoma City later that year. Today, they live on the same block Paul grew up on, and they have three children: Liza, Charlie, and Sam. They are parishioners at St. John Vianney Catholic Church.

In 2008, Paul received national attention for writing “The Roadmap for America’s Future,” a plan to spur economic growth by fixing the tax code and pay off the national debt by reforming Medicare and Social Security. In 2011, he became chairman of the House Budget Committee, where he incorporated many of the roadmap’s ideas into his budget proposal, “The Path to Prosperity.” The House of Representatives passed his budget proposal every year he was chairman—or four years in a row. In 2012, Paul was the Republican nominee for vice president of the United States. In 2013, he and Senator Patty Murray (D-WA) negotiated the first budget agreement in a divided Congress since 1986.

Getting the Job Done

In 2015, Paul became chairman of the House Ways and Means Committee. In the spring of that year, he led the effort to renew trade promotion authority for the first time since 2002. Paul also played an important role in the first significant Medicare reform in years.

In October 2015, after then-speaker John Boehner retired from Congress, Paul was elected speaker of the House. A committed conservative and public servant, Paul has spent his life advocating for real solutions that will expand opportunity for all Americans. And to the speakership, he brings that same passion for getting results.