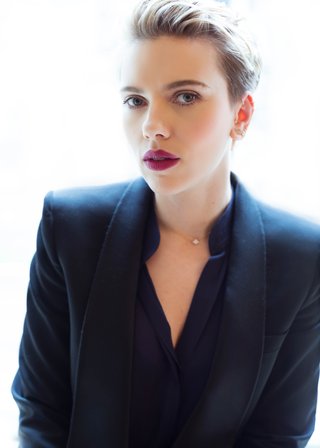 Tony and BAFTA winner and four-time Golden Globe nominee Scarlett Johansson was most recently seen alongside Kate McKinnon and Zoe Kravitz in the R-rated comedy Rough Night and in the lead role of the Major in Ghost in the Shell, a live-action adaptation of the original Japanese manga. Up next, she will reprise her role as ‘Natasha Romanoff / Black Widow’ in Avengers: Infinity War, which recently wrapped filming and is set for release on May 4, 2018. She is currently filming the fourth Avengers film that’s scheduled for release in 2019. In 2016, she starred in Captain America: Civil War, voiced the python ‘Kaa’ in Disney’s live action/CGI animation adaptation of The Jungle Book from Jon Favreau, starred in the Coen Brothers film Hail, Caesar!, and lent her voice to the animated musical comedy film Sing. Her other recent roles include Luc Besson’s action-thriller Lucy, Jonathan Glazer’s sci-fi art film Under the Skin, and Spike Jonze’s critically acclaimed sci-fi romance Her, where she played the role of operating system ‘Samantha,’ which earned her a Best Actress award at the Rome Film Festival. She is currently the highest-grossing actress of all time and highest grossing actor of 2016, with her films making over $1.2 billion that year and $9.3 billion overall worldwide.

Johansson received rave reviews and the Upstream Prize for Best Actress in the Controcorrente section at the Venice Film Festival for her starring role opposite Bill Murray in Lost in Translation, the critically-acclaimed second film by director Sofia Coppola.  She also won a Tony for her Broadway debut in the Arthur Miller play “A View from a Bridge” opposite Liev Schreiber. She wrapped her second run on Broadway as ‘Maggie’ in “Cat on a Hot Tin Roof” in 2013.

At the age of 12, Johansson attained worldwide recognition for her performance as Grace Maclean, the teen traumatized by a riding accident in Robert Redford’s The Horse Whisperer. She went on to star in Terry Zwigoff’s Ghost World, garnering a “Best Supporting Actress” award from the Toronto Film Critics Circle. Johansson was also featured in the Coen Brothers’ dark drama The Man Who Wasn’t There, opposite Billy Bob Thornton and Frances McDormand.

Her other film credits include: Jon Favreau’s Chef, The Avengers, Don Jon opposite Joseph Gordon Levitt, Hitchcock opposite Anthony Hopkins; We Bought A Zoo for Cameron Crowe; the box office hit Iron Man 2; the Weitz brothers’ film In Good Company, as well as opposite John Travolta in A Love Song for Bobby Long, which garnered her a Golden Globe nomination (her third in two years.) and Woody Allen's Match Point, which garnered her 4th consecutive Golden Globe nominee in three years.  Other film credits include He’s Just Not That Into You, Vicky Cristina Barcelona, The Other Boleyn Girl, The Spirit, Girl with a Pearl Earring, opposite Colin Firth; The Island opposite Ewan McGregor; Brian DePalma’s The Black Dahlia; Christopher Nolan’s The Prestige, and The Nanny Diaries.

Her additional credits include Rob Reiner’s comedy North; the thriller Just Cause, with Sean Connery and Laurence Fishburne; and a breakthrough role at the age of 10 in the critically-praised Manny & Lo, which earned her an Independent Spirit Award nomination for “Best Female Lead.”

A New York native, Johansson made her professional acting debut at the age of eight in the off-Broadway production of “Sophistry,” with Ethan Hawke, at New York’s Playwright’s Horizons.