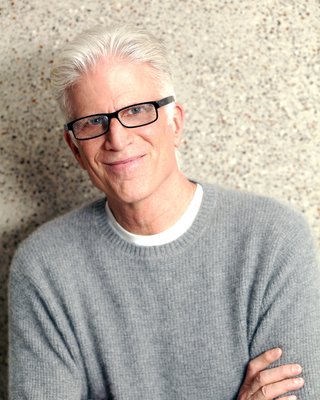 Ted Danson's versatility in both television and film makes him one of the most accomplished actors today. Danson is a Golden Globe- and Emmy Award-winning actor known for an array of exceptional performances, most memorably for his portrayal of Boston bartender Sam Malone on NBC's multi-award-winning and iconic comedy "Cheers," which ran for 11 seasons and won three Emmys as best comedy series. Danson currently plays Michael on the new NBC comedy "The Good Place." He will also be appearing in the highly anticipated return of HBO’s “Curb Your Enthusiasm” in 2017.

Danson recently co-starred on the second season of FX's critically acclaimed series "Fargo." He also recently co-starred as shift supervisor D.B. Russell on "CSI" and "CSI: Cyber" for CBS until both series ended their respective runs. Danson had a memorable role as tycoon Arthur Frobisher on the FX series "Damages," which was both Emmy- and Golden Globe-nominated for best drama series.

On the comedy side, Danson co-starred on HBO's "Bored to Death" and had a pair of appearances on the pay cabler's popular series "Curb Your Enthusiasm," created by and starring Larry David. Other TV projects co-starring Danson include a Golden Globe-winning performance in the memorable 1984 telepic "Something About Amelia," "Gulliver's Travels," "Mad Money," "Knights of the South Bronx," for which he received a SAG Award nomination, "Our Fathers" and "It Must Be Love." He was also the star of CBS' "Becker," which ran for six seasons and earned him a Golden Globe nomination.

On the film side, Danson has appeared in several high-profile projects, including the 1987 blockbuster hit "Three Men and a Baby" and its sequel, "Three Men and a Little Lady." He also had a co-starring role in Steven Spielberg's World War II masterpiece "Saving Private Ryan." Other movies on Danson's resume include "The Amateurs," "Cousins," "Dad," "Made in America," "Getting Even with Dad" and "Pontiac Moon."

Raised outside Flagstaff, Arizona, Danson attended Stanford University and became interested in drama during his second year in school. When he transferred to Carnegie Tech, he continued to focus on acting and after graduation was hired as an understudy in Tom Stoppard's off-Broadway production "The Real Inspector Hound." Danson relocated to Los Angeles in 1978 to manage the Actor's Institute for a year and a half while he taught there. Six months after his arrival in LA, Danson earned a role in "The Onion Field" and co-starred in the TV movie "The Women's Room."

In addition to acting and producing, Danson is an environmental activist, founding the American Oceans Campaign (AOC) in 1987 to alert Americans to the life-threatening hazards created by oil spills, off-shore development, toxic wastes, sewage pollution and other ocean abuses. He now serves on the board of directors of Oceana, the world’s largest international advocacy organization focused solely on ocean conservation. Danson resides in Los Angeles.